We had 3 AWOLS on the fifth session in March and one of them was AISAN LIM, a Delta and an ACER-pact member!!!! When an ACE member is absent, the ACE council will brainstorm for a punitive award.

There were Sarge Simran, Corporal Faizal Ariff, Lans Corporal Jason Moriarty and Lans Corporal Elin Klemetsen Fossum for today's training and we were introduced to 'The Giant Progressive Store Moves' (abbr. GPS-MOVE), a good circuit in preparation for the Bareno run this weekend; with 50 Bootcampers participating including me. There were two running circuits prepared with an equal distance of approximately 200 meter loop. The platoon was divided into 2 groups Alpha and Bravo with an equal 20 team members per group aka 'transporter'.

The starting position known as 'the Store' comprised of 8 mock rifles, 2 mock bazookas, 8 sandbags and a mother of rope. We are very much alike Frank Martin (Jason Statham) being 'The Transporter'... and had to transport all those merchandise out from the Store and deliver them back safely. While transporting, we faced various challenges with 'pancit' tyre, carburetor engine catching up with super V12 in a convoy, muddy, flood and Taliban giving chase. Both Alpha and Bravo team must compete to complete the circuit first.

We began the first lap without any tools or toys... more like warming up (Diesel engine takes longer to warm-up). We weathered through the worst 'travelling' condition with flood & mud route. The running track was awful but it would have been too easy otherwise. The flood and mud added the level of running difficulty. We were only allowed to 'transport' a maximum of 2 mock rifles per lap with each rifle weighing approximately 4 kg each. I collected one of the first two rifle and another 'transporter' took the other and continued the run. We ran as a team but when the V12 over-accelerated, they were attacked by Taliban and had to U-turn back to the other team members. We 'Sapu licin' the mock rifle on the fifth round and enthusiastically ran to collect the white bazooka that weight 6kg.

After completing 1 warm-up lap without any merchandise, 4 laps to transport the 8 mock rifles, 2 laps to pick-up the 4 mock bazookas and 2 laps to collect the 8 sandbags...... or total of 9 laps @ 20 merchandise, we must now transport the blardy heavy mother of rope that weigh more than 20kg. It took four of us to ferry the Rope!! All of us were now running with at least one merchandise and must complete more laps to deliver those merchandise at the designated imaginary 'Store'.

All the merchandise transported can only be delivered on the same fix maximum number as per during the pickup eg. the Rope on one lap, 2 laps for the 8 sandbags, another 2 laps to drop-off the 4 mock bazookas, 4 laps to deliver 8 rifles.

After completing 9 laps of deliveries, we lost to team bravo and had to perform 10 repetition of Grunts.. with pleasure!! We completed the GPS-MOVE, in approximately 35 minutes. 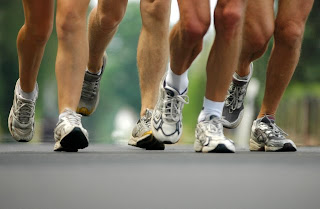 We proceeded with the next circuit Strength Cardio Partner Relay (abbr. SCP-RELAY), aka F1-Relay was also about running. Team Alpha was further divided into team A and team B with every member from each team partnering each other in a pair (eg one team A pair with one team B). When team A sprinted on the same 200 meter muddy track as per the first circuit, the partner at Team B performed a fix exercise waiting to be tap. Once 'Tapped', team B partner must sprint, while the Team A, relay and performed the exercise. The first exercise was the sumo-squat, push-up ... There were no abs workout today to my disappointment.

We had a good 4 rounds of 200 meter sprint or a total 800 meters on the second circuit and had completed 19 laps of 200 meter run during the first circuit excluding the 'bouncing-back' to support the slower members. In total we did 23 laps of 200 meter or 4.6km obstacle run today.

We ended the session with our regular warming down session. I burn a total 681 calories with the two circuits and is now counting down for tomorrow's gym workout. The sessions in March thusfar has been quite mild and relaxing compared to the session in February.