Posted by ARMIN BANIAZ PAHAMIN on October 14, 2011
OH F#@k!!! My platoon is going to kill me!! its 5:30pm and I'm still poopoo'ing.. Aiiks too much information and I have not brushed my teeth or shaved yet. Oh heck.. No one is going to know! ....and there I was punctual at 5:42pm!!! At 5:45pm, Sarge (COBC) Dann started the 'show'!! We had group sex trx... Team Alpha that comprised of the Delta & Strong Seals began with back workout with the TRX! Okay.. rewind abit.. was abit excited with adrenaline overdose!!

Session began with the conventional warming up and stretching which I was peeping to find Ankur Pandey whom was always at the 'other' end but he was missing!! along with the UNCLE JOHN CHUAH!!! I told ya.... whenever the 2 J's.. James Fong and Joe Liew is around.. Uncle John Chuah will happily overshot in wonderland. Then I peeped for a Mohamad Fazli's 'BICYCLE'.. also was missing with John Chuah and Ankur Pandey. With the 2 J's, I quietly went to Seal but was caught by Sarge (COBC) Dann!! ARMIN GO BACK TO DELTA WITH JAMES!! Alamak!!

The platoon was divided into 3 sections, team Alpha, Bravo and Charlie and Team Alpha began with the TRX for 100 repetitions led by Sarge (COBC) Dann!!! Team Bravo with Corporal (COBC) Tom and Team Charlie had Corporal (COBC) Chun!!!

Everything went on for a few sets of each circuit with a different muscle group being worked out. Shortly later, Sarge (COBC) Dann cried out, Kenix Lim & Leesa Tan, you may go now..???!! haaa.. the two babes was given 15 minutes discount? not fair! 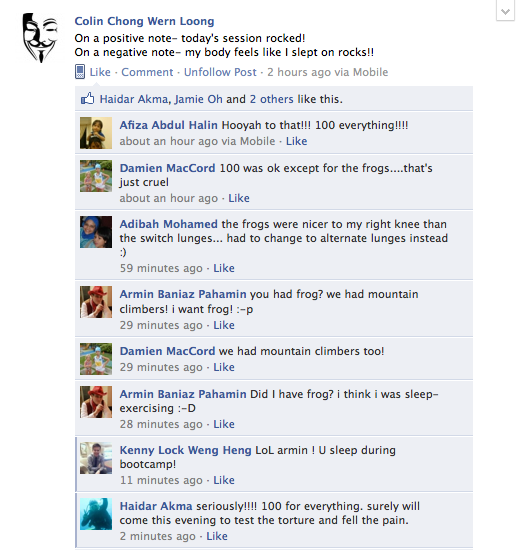 Today's Centurian was really unexpected but that is what COBC is all about.. the unexpected!! With all the 100 repetitions I cannot help but to I feel abit like.. err.. Brad Pitt?