Posted by ARMIN BANIAZ PAHAMIN on October 06, 2011
I have been keeping abreast of the Cambodia latest scandal unveiled when Senate President Samdech Akka Moha Thomak Photisal Chea Sim's Chief of Body Guard was detained for illegal possession of arms. Further to that, two of the Senate President's Advisers were arrested together with a former Cabinet member and the latest arrest of the Samdech President's Chief of Protocol. Observing the so called 'Freedom of Press' in Cambodia especially from the Cambodia Daily, the paper that pride itself for reporting "All News Without fear and favor" as its tagline, I could not help but to think of a similar tagline maybe for..... err the Malay Mail? ...Datuk Ahirudin Atan alias Rocky Bru? We have been denying to comment on any media although the Cambodia Daily and Phnom Pehn Post had both written to me but since the facts of the story was twisted of sort and to some extend manipulated ("Freedom of Press?"), I have to correct some facts (at least from a foreign investor's point of view) from that written in both media. 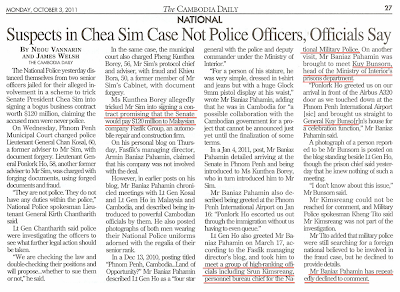 1) Letter of Award issued to our company was not a fraud.  It was signed under the Senate's letterhead, signed by the Senate President and sealed with the Senate's Red emblem. As stated in the Court report (referred to the Cambodia Daily), the Senate President was tricked to signed the Letter of Award by its most trusted Generals, Adviser, Chief Protocol or whoever. Whether he was tricked or otherwise, who would question the authenticity of any document signed by the Country's Senate President especially when the Senate is the Upper House of the Parliament (in Cambodia) with legislative power (see write-up below or click here for more information on the Senate of Cambodia) as oppose to Malaysia, which the Upper House only review legislatures passed by Parliament. The Letter of Award is as good as any other contract. (CLICK ON PICTURE TO ENLARGE) 2) In a separate funding agreement signed on behalf of the Senate, on his capacity as the President's adviser, His Excellency Lt General Chan Kosal undertake to fund the Letter of Award via the Care for Cambodia (C4C) foundation which he (H.E. Lt Gen. Chan Kosal) is the President. As such, we believe, the project does not require the approval from Prime Minister Samdech Hun Sen and his cabinet as the funding was a private initiative via the C4C foundation without any funds to be disbursed by the Cambodia Government. 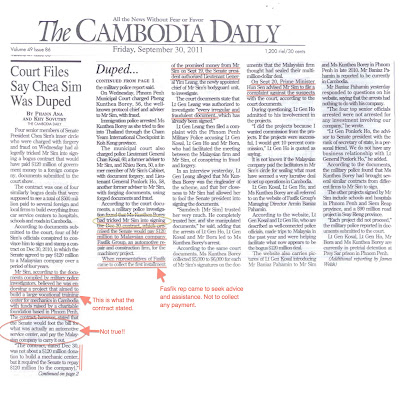 3) We invited H.E. Lt. General Chan Kosal et al, H.E. Lt. General Ponlork Ho et al and any other prominent figures from any countries to our home in Malaysia as our kind gesture to foster good relationship and friendship between our Countries and Companies. Who we dine, met and befriended should not be manipulated into linking anyone with anybody.

5) We met the Senate official to assist us in the disbursement of first and other outstanding payments (as provided for in the Contract) from H.E. Lt. General Chan Kosal as the President for the Care for Cambodia Foundation; the party that undertake to fund the project and did not/have not made any claim against the Cambodia Senate. The milestone report submitted to the senate was the progress report that we were requested to submit periodically to the Senate and base on the progress report submitted, the Care for Cambodia foundation was suppose to disbursed the amount owing.

6) The project has incurred quite a substantial cost which we have funded on our own without any payment from any parties. However, we respect the Royal Kingdom of Cambodia Senate, Government and its institution, and trust there are other means to resolve this issue amicably. We do not have any intention to seek legal proceedings against the Cambodia Senate, the Government and its institution and because we do not want to sour our relationship with the government as we do have other joint ventures and projects with local Cambodian private companies.

7) However, we appeal for Cambodia government to re-look into the project that is beneficial to both the Government and its people.

Below are some articles written by local Cambodia news papers in English. There are other articles but we only managed to keep these articles. 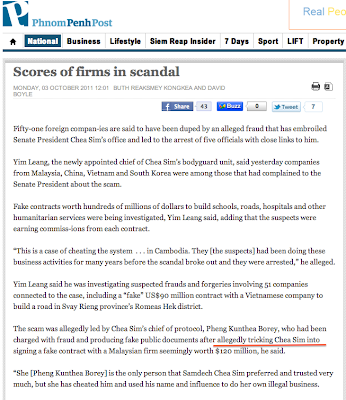 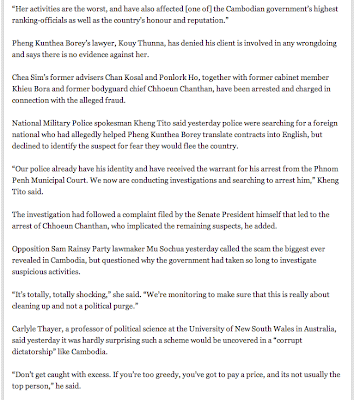 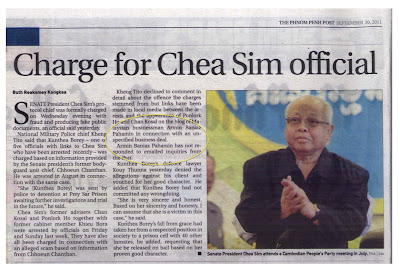 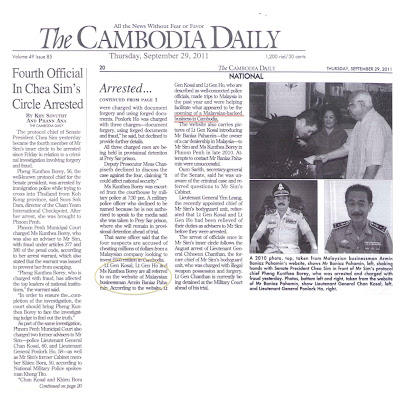