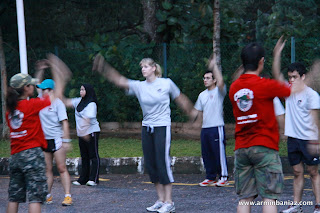 A second, a minute, an hour and/or a day that passes by, is gone forever. A week or a month flyby and is gone before we even had the time to ponder what we had productively done and/or achieved. That is how we spend our time.. lavishly! so lavished that if it were money spent, we could probably be in deep overdraft; spending more time that we don't have. However, for recruits at the Chief's Original Bootcamp (COBC), a month passesby with a good spirit of achievement! Especially if they were to A.C.E. their COBC program because trust me, only those that have ACE their monthly COBC would understand the struggle to be discipline in an investment that is far better than Public Mutual unit trust.. an investment to a better health and a better lifestyle. That is why at the COBC, we recognize the recruit's effort to ACE the monthly program by accepting them in the HALL OF ACE!! Currently a work in progress for the past ACERS but from September onwards, the achievers can be viewed at HERE.

With a good health, we have better quality time in the 24 hours aday. With better health, we have more savings than those spend on pills, medication, doctors etc. I told my sister Dr Teratai Edithy Pahamin, if the whole population joined the COBC, you and other doctors will be out of job!

Having attended DH Zulu platoon and was welcomed with a basket full of 8WC diet cheese cup-cake, Mohamad Fazli no-oil fried chicken at Bandar Utama, pot luck at USJ Platoon, I really felt bad for not participating in bringing something for everybody. After much thought, thinking and thinking... and brainstorming.. I decided to give some souvenirs to all comrade at BU Alpha platoon, as a farewell gift to end the October session. So this morning, I brought with me 4x 30 seconds squat-pulses.. THANK YOU THANK YOU ALL.. maybe not as delicious as Mohamad Fazli's oil-free fried drumstick but our drumstick do feel delicious? Wink...

The instructors too gave out some gift today... for today's workout, the platoon was divided into three sections with a good mix of rangers, seals and deltas. I was in the same group as Otaii Uncle John Chuah, Otaii Rienna Choo, Otaii Alice, Otaii Leesa Tan with 8 others. The three platoons were segregated into three stations with approximately 100 meters apart. At each station we had to performed different exercise from stationary cardio, abs and legs. All team members had to perform 15 repetitions at each stations and after all team members at each station completed the reps, they had to run to the next station with all team members running within only 3 steps apart. if any team members were left behind further than the 3 steps, they get 5 seconds 'stalling' as punishment. The objective is for each team to speed and tap the next Team and once tapped, the losing team with the commanding instructor must perform 20 grunts as punishment. 20 GRUNTS with the instructor!! Woohoo..

Naturally, the Otaiis in my team wants to get our commanding instructor Corporal (COBC) Chun to workout.. so we got our team 'tapped' (konon la kan.. bluwek) and we together with Corp Chun did 20 grunts... thereafter, we tapped Sarge (COBC) Dann & team twice and Woohoo.. felt like an orgasm watching them Grunt'ing and finally, we tapped Corporal (COBC) Tom's team and even without pop-corn, we had a good show watching them all Grunt'ing.

But in the end.. we felt shameful.. Sarge (COBC) Dann & team are now fitter and leaner!! they had 40 grunts fitter and healthier than us... so unfair!! Maybe joined Subang USJ1 tomorrow? and get Corporal (COBC) Wan with 40 grunts?