Posted by ARMIN BANIAZ PAHAMIN on October 07, 2011
Historic... arrived so early at 5:38am.. damn!! ...err Pheww!! Stoppedby 7/11 store and bought some sweets (in case of hypoglycemic) but hoping to give some late-comers-angpaw-punishment to fellow BU-Alpha comrades but it didn't workout. At 5:40am, Sarge Dann called all recruits for a roll-call and somehow, either it was too dark or my eye was playing trick but I did not see John Chuah.. I think we can now crown him the FFK-King but the alternate-King James Fong was present!! With Yam Chan SiuCheh... Waa.. alongside Otai Rienna Choo, Otai freda Liu and dozens of others. Our 8WC Challenger Mohamad Fazli is the biggest Loser thusfar!! I mean biggest weight loser!! Others were gaining momentum too. Even the instructors were looking leaner and meaner! Speaking of which, today Sarge (COBC) Dann was assisted by Corporal (COBC) Tom and Lance Corp (COBC) Suresh for the Relay Run Ragged circuit!! So we had 3 in a team relay and the sub-two-hour 21km runner James Fong must be in my team Grrr... but fortunately we had a doctor in the house!! Dr Malek Aziz was the third member in our team.

With Dr Malek Aziz in Point-A, me at Point C, the third team-mate James Fong had to sprint from point A to Point B and while the runner sprinted, those at Point-A and Point-B performed stationary workout.

The stationary workout focuses on Back muscle, Shoulder, legs and Abs. There were 12 different workout prepared for Point A and Point C while the sprinting was alternated with Bear Crawl, Long Jump and hop. This was the second time I wore my suede leather Vibram five finger to bootcamp and I have to be honest.... VFF was made for bootcamp!! Damn good shoe..

It was inspiring to workout with the instructors!! Somehow I always get picked at.. but I think it was not me.. I think the instructors were too hyper!!! I tried diverting their attention by calling SHEAR LING TOH... FAZLI!!!... DOC.. JAMES..... but attempts were futile. Sarge (COBC) Dann was chasing almost everyone from Delta to Rangers.. whenever he tapped anyone, we gotta do 10 grunts.. Corporal (COBC) Tom seemed to have an eye behind his head..... everytime I slowed down........ he will be calling ARMIN!!! You a Stallion no stalling!!! but actually there was no time to stall.. everytime I tried, LC (COBC) Suresh will be working out beside me.. and everytime he went away to another recruit, Corp (COBC) Tom came and workout beside me... maybe we should change the title to Relay Run Gagged instead of Ragged.. :-D so today, I died.. and reincarnated being fitter!! yahoo.... 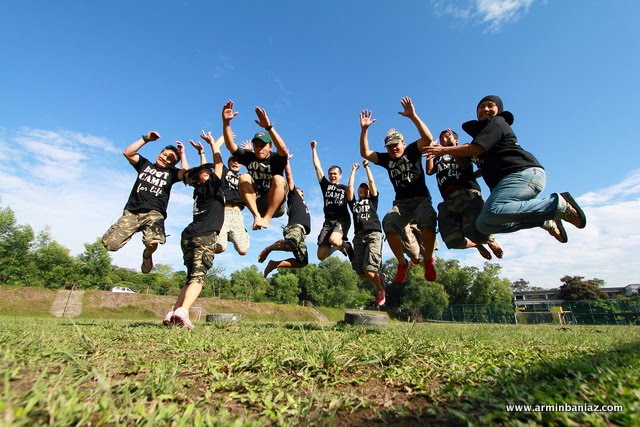