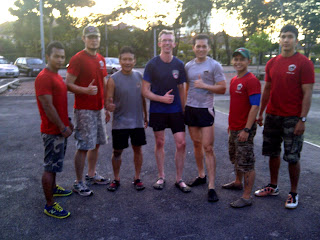 What happen when a Delta from Cogee Beach, Australia joined us at the Chief's Original Bootcamp, Malaysia? Yes.. the tyres came out of hibernation..... no... Just kidding but joke aside, we had David Jones from the Original Bootcamp, Australia at COBC Bandar Utama. David Jones is on a working visit to Malaysia and although his schedule was full with meetings and appointment but he persevered the discipline to exercise. David Jones or more fondly known as Dave booked a taxi to attend BU-alpha platoon that start at 5:45am but arrived 3 minutes late when the taxi lost its way. Naturally, the platoon had 4 sets of 30 seconds squat pulses... a gift from Australia?

Recruits from Australia or anywhere in the world are recognized at any of the CHIEF's Original Bootcamp locations in Malaysia or at any locations under the ORIGINAL BOOTCAMP, Australia trademark world wide. Recruits from Malaysia including Taj Mahal, John Chuah, James Fong, Chan Meng Yam, Freda Liu, Lilian Lee are amongst dozens of other recruits that have attended the bootcamp at the ORIGINAL BOOTCAMP, in Australia while on holiday and/or work trip. Sometimes, a change in training environment does have an impact on our mojo and energy.

David Jones is an ultra-marathoner and has been with the ORIGINAL BOOTCAMP, Australia for already 12 months. The tyres that came out of hibernation was only a teaser to a man that had even participated in the 'Longest Day' event; a special training session under the Chief's Original Bootcamp that challenges your mental and physical strength by exercising for 23 straight hours in a day with only four 30mins break inbetween. Convinced to give Dave the 'Malaysia hospitality', we ease him the workload by me driving the Tyre drag but when suddenly the tyre felt alot heavier  (with Sarge (COBC) Dann taking a ride standing on the tyre, we start rotating the 'driver'. From a tyre drag, we had to carry the tyre (with hand straight up) which we prayed hard that Sarge (COBC) Dann was not tempted to be on top of the tyre while we carry it with full straight arm. Who knows what this Sarge (COBC) Dann have in mind... he can be wicked at times.

The program, our circuits were scientifically designed by Chief in Australia to ensure the best gained in the 1 hour spent at every session. Every session can never be easy because the tagline on all program was.. "You have had a good session if you find it hard to complete it"... so if you were struggling to complete and had completed the session without giving up, meaning you have had a good session!

If you find it comfortable to complete the session.. meaning, the instructors were not doing their job!! Speaking of which, did you hear the instructor's scream today? "GOOD FORM ARMIN!!" waaa.. did you hear that? hahahaaa I swear I did not bribe or pay them extra for that.... Instructors are very stingy with their compliment and if they ever compliment you, you better god damn well record it!!! 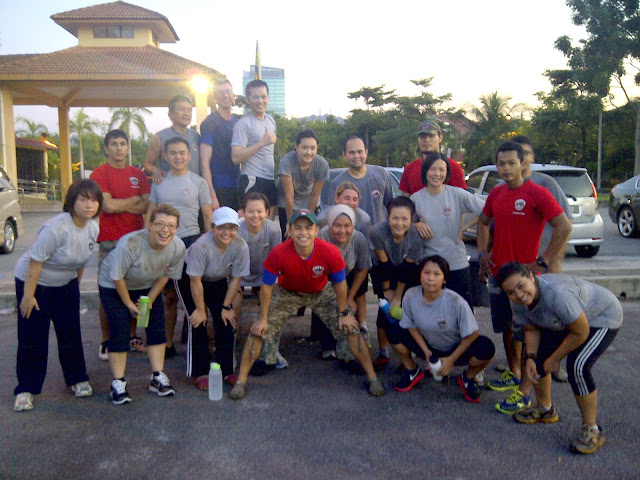