After more than a year of retirement from running, this year I did the unthinkable.. I took up running again... still with a damaged knees and have registered for a full 42km marathon (still cant believe). Why..? Yes... The super influenced of some super kiasu COBC Damansara Heights Otaiis.. How and who can turn down the dozens of invitations from friends whom are as enthusiastic as how I was. Birds of a feather, flock together.. In fact our COBC runner's fraternity has grown and recruits whom were once only a 'walker' are now becoming a runner. Those that had never imagine or even think of running.. are now running.. and I am so proud of them.


To keep the momentum high (err especially for me whom can still dream of running a full marathon with a damage knee), Ilyanna Aylin Ayob, had agree to train with us from COBC.. Ilyanna Aylin Ayob or more fondly known as Nana was previously our COBC Seal Pup instructors whom went on a long leave to pursue her dream to run around the world in various running marathons. Nana is also a blogger at HERE. Forget all the textbook and theories about running, the best way to learn is to share the experience from someone of our own 'species'.. someone who was never born an athlete, someone normal, someone whom had never run in her entire life and had only recently.. just a few years ago, started running. 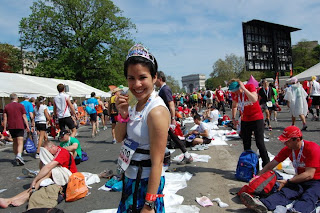 Ilyanna Aylin, now a famous celebrity runner was a gym-goer!! Ilyanna Aylin attends the gym and an occasional futsal game to tone-up her physique and to maintain the sexy look. She began running in 2008 with Rose Emini Pahamin and first participated in races at the inaugural Singapore Sundown marathon with me, Nawal Aini Zulkifli, Nyna Mohsen, Hani Muhaini and Rose Emini Pahamin. Since then.. from a commoner she became the Royal of runners. After the Singapore Sundown, Nana participated in the Adidas King of the Road race in Shah Alam but went to retire for a year after being diagnosed with Spondylosis L5 - a general degeneration of the spine. 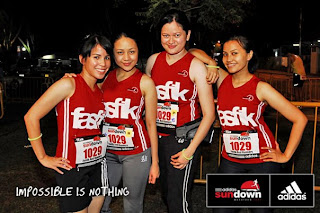 When Nana realized she had overcome her medical restriction, she began running with a vengeance in year 2010 by running 14 races!! Nana ran one 30km race, 5 half-marathons, two 15km runs and one 25km challenge before running her maiden marathon in Melbourne with me, Nawal Aini Zulkifli, Rose Emini Pahamin, Sandy Roberts and Yum Kin Kok. After Melbourne, Nana race another 12km race and one half-marathon. 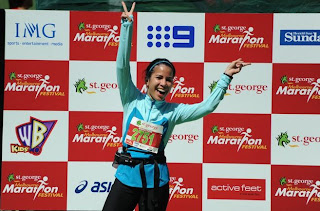 Last year 2011, Nana ran 15 races across 3 continents in Paris, Gold Coast and New York. The 2011 highlights were:
1. Nana's birthday was on the same date as the Paris Marathon in April and Nana completed the marathon within her targeted sub-5 hour timing even though she had an abscess growing underneath her skin near her stomach area and she ran in pain with it!
2. Nana completed her first World Marathon Majors, the ING New York City marathon in November 2011 with a personal best (PB) timing sub-4:30 hour. Nana achieved the timing with 3 months of proper training.
3. Dressing up for races here in KL. If there was one princess in fancy dress running all over town.. then that is Nana. While we at COBC would be on fancy dress at Grad party, Nana would dress up and run marathons. 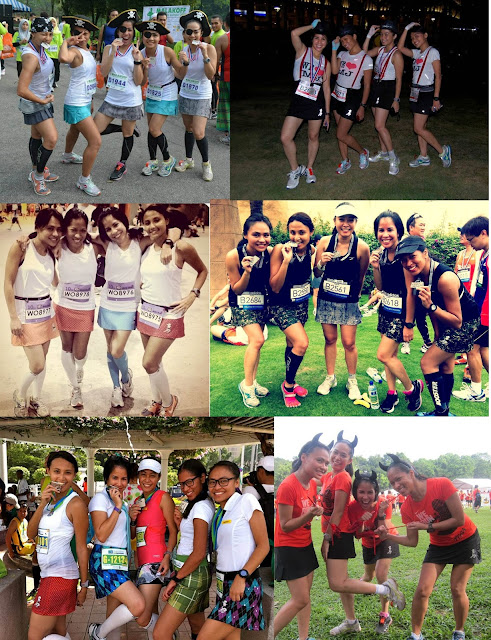 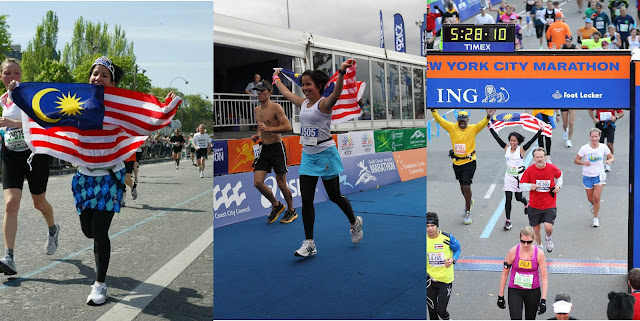 Recently in 2012, Nana completed the Mizuno Wave Run (yes.. also with me, Nawal Aini Zulkifli and Rose Emini) at UPM with a timing of 58 mins 21 seconds for 10km and was placed at #36 out of 615 in Women's Open category.


Nana's passion in running especially from a non-runner to a serious athlete had attracted the interest of various medias. Among the many featured articles about nana awere as follows:

Nana have completed 5 marathons worldwide namely Melbourne, Singapore, Paris, Australia, New York USA but had never run any marathons in Malaysia. This year, beside the hectic lifestyle being a Marketing Manager, Nana envisioned to break her personal best timing (PB) and to run a full marathon in our motherland. Her biggest dream is to run the Boston Marathon!

Having kept her self lean, fit, happy and most importantly sexy.. Nana is still single and is in the hunt for err.... a companion! So whether you are training for your first 10km run.. or 21km race, a full marathon or to beat your own PB,.. or simply to run in search for a soul mate, Nana is preparing a route for everyone of different fitness level. For COBC'ians running the Bali, Brookes or any races.. lets train together and scream HOOYAH with a vengeance!! Remember our NEW YEAR RESOLUTION at HERE? Lets make it happen!!