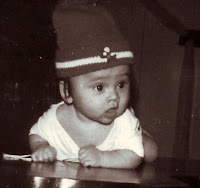 1 March 2010... 36 years ago in a small hut somewhere in Kuala Pilah, Negeri Sembilan, a pretty young, lovely, charming and caring mother gave birth to a cute, adorable and handsome son...... Me. She was a teacher and dad was the State Development Officer in Negri Sembilan in 1974.

Mother was only 24 years old... still hot & adorable then and still is now at 62 years of age. Too hot that less than a year later.... Melor Edina Pahamin was born depriving my quality time with mother. Dad!!!!! 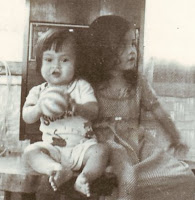 Mother and dad was not the only one that was the happiest when I was born but Chempaka Emalin Pahamin, the eldest too could not keep her hand off me. She would take me everywhere to play.. even to share her teddy bear.. (Eeek.. ). Chempaka Emalin has always been the household story-teller and sometimes we were stuck at the dinner table for hours listening to her stories.. If she does not tell tale, she will nag and nag.. (stick tongue out). ...but we do enjoy the tale (big smile). 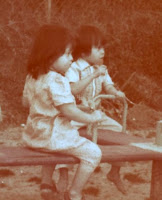 This sister... Melor Edina Pahamin whom is only 11 months younger than me is the most 'Manja' in the family. Now all her 4 children inherited her character (slap my forehead, aiyoo).

When we were growing up, Melor was the closest to me being only a few months apart.. and could not understand why we had to be in separate class everytime we went to school. When we moved to Petaling Jaya from Kedah in 1986, I brought her on her first day at school when Dad and Mum had to attend to my other siblings and in that year almost beaten  up a guy who paid interest in her. Was so over-protective, I was 12 years old then. She was always with me until I left for London. I will visit her almost weekly while she was studying the International Baccallaureate in some jungle @ Banting. Then she left to live in another jungle @ the University Aberythswyth, Wales which I frequented but not as regular as when she was in Banting. I did not know how she survived in Aber until I found out later, that she was not there alone.. she had Rhiza Ghazi.. now the beloved and gentlement husband. No wonder she can easily fit in our house in some jungle @ Penchala.. she had good training in Banting and Aber. 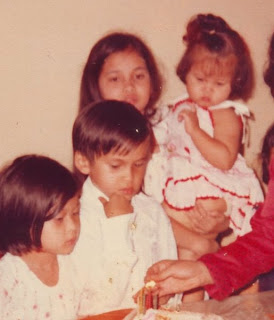 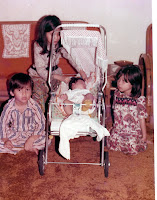 Now there's four of us... This sister, at the youngest age, always took care of us. When she was young, before she learn to prescribe medicine and diagnosing sickness as a doctor, she will always serve us 'seniors' food.... Eerr...Is that bullying?

When I was first admitted in General Hospital for Leukaemia, she was the only one that jumped to hug me and cried profusely screaming don't leave her, thinking that I am going to die. Other siblings probably secretly cried in the toilet. 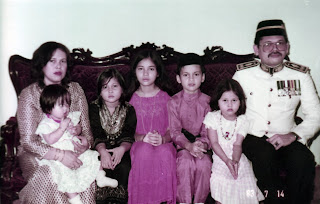 In 1982.. came this sweet small adorable sister (on mum's lap)... Rose Emini Pahamin whom had grew up to became a certified accountant... but not the typical 'Square-Type' accountant. The party type of accountant.

Rose Emini was my not only my life Saviour being the Bone-marrow donor for my bone marrow transplant but she is now my partner's in crime!!! in most of the things that we do...!!!! yaa.. we are more or less of the same age now. Sometimes, I think she is older when she 'burn-out' faster than me (big grin). 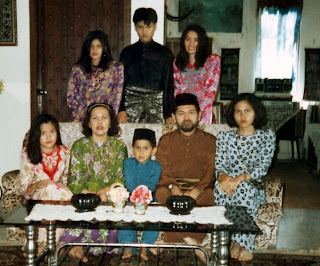 Then came the youngest in the family.. Amnan Bazli born in 1985... some party animal whom are now happily enjoying his life in London.

When he was at school........ I had to rescue him many times from the school disciplinary teacher and from some gang-fight. Sheeesh.. I wanted to scold and beat him up for his notoriety but... I was like that too. So I am sure he will grow out of it... hopefully soon.

On my birthday today....... I am thankful beyond word to Dad, Mum and Sibilings whom had showered me with so much care, love and affection. I could not help but to smile and laugh reminiscing our growing up moment and what we grew up to become. Family values is indeed priceless. To grow up and be surrounded by loving and caring family members is God-gift. We had our fair share of sacrifices when growing up which I will forever reminisce and cherish.

Nawal Aini Zulkifli, whom tirelessly and patiently stood by me with all the flaw and sickness that a man can have and to bear me with the most adorable Aaraf Armin, only Allah swt can ever repay the loyalty, commitment and sacrifices. She bake for Dad, Melor and me her signature home-made chocolate birthday cake which... ironically, destroyed my well-preserved diet... its impossible to resist!!

To all relatives and friends whom took the trouble to buy presents & gifts, cards, email, sms, called and drop me a note to wish me a Happy and Merry Birthday....... I appreciate the gesture and will remember your kind prayer, Doa and greetings. To name a few.......

My apology if I could not reply to all the Greetings sent... but I do appreciate your kind thought to remember me on my birthday. Thank you.

From where I was, I never thought to see and celebrate another birthday. Until next year Insya Allah, take care of yourself and stay healthy.

When I was in SRK Kampung Tunku Primary school many many years ago, I always signed schoolmate's autograph book with F.R.A.N.C.E.... which means Friendship Remain And Never Can End... I am signing off with the same FRANCE.... You are the best!! 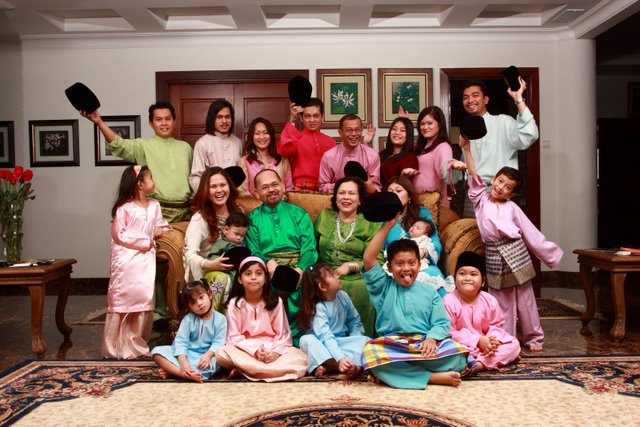