TIME IS ALWAYS OF THE ESSENCE. ITS ALL ABOUT ADIBAH MOHAMED. 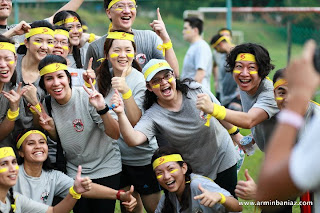 We first befriended Adibah Mohamed when she became a bootcamper at the CHIEF'S ORIGINAL BOOTCAMP (COBC) in September 2010. Adibah Mohamed, was an IT specialist at IBM for 8 years before her current employment as the Senior Manager at Intramas Technology since 2008. A strong and cheerful lady, Adibah will have anyone that surrounds her being all smiley and inspired, especially when it was time to exercise and to go on a diet. At the training field, she would give-in all her energy into her workout to make sure she continuously improve her performances. Not surprising, she achieved her target to get into Seal from a Ranger shortly after joining COBC. She would never say NO to any challenges. She has that strong fighting character that you can feel within seconds when you are with her and during every conversation. Adibah is also a person that would go out of her way to help anyone in need. When we were on the 8 Weeks Challenge last year, she even cook and share with us various meals and recipes after our morning workout session.

Barely a month ago, Adibah was diagnosed with a Stage 2 breast cancer. She had lived with a lump on her right breast for already 3 years but the lump that occasionally throb with minor discomfort, had never bothered her until recently. Adibah ignored the discomfort until a week before Eidul Fitri when the throbbing pain lasted longer than usual. Her sister, a medical officer at the Sungai Buloh Hospital took her in for a medical examination but comforted Adibah by suspecting the lump to be an excess fluid. The Doctor said, the symptoms of a painful lump is usually normal and is not cancerous. A cancerous lump usually would not cause any pain and is usually a silent killer. It could probably be some excess fluid or a lymph node. The doctor prescribed a two weeks supply of antibiotics and send her back home. 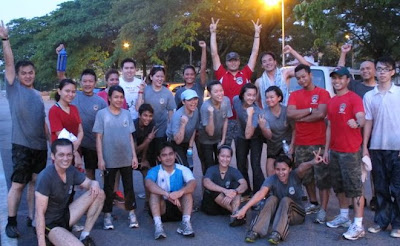 Two weeks later, the pain did not subside, the lump was still throbbing and the pain was still there. Adibah's sister suggested for Adibah to self-examine under her armpit for any other lump. This is one self-examination that many women failed to perform due to either own ignorance or lack of knowledge. Adibah discovered another smaller lump. Her sister doctor immediately took Adibah for an Ultrasound at the hospital on the eve of Hari Raya, then took a biopsy or a sample of lump fluid, send it for further examination and made an appointment for Adibah to meet a specialist surgeon. The result of the biopsy was received approximately a month later and indicated an abnormalities. 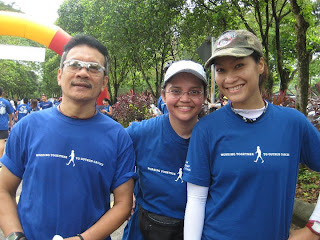 Given Adibah's family trait of breast cancer on both her father and mother's family history, the surgeon recommended a surgery to remove both lumps.

Two of Adibah's cousin from her father's family had stage 2 and stage 4 breast cancer. A cousin from her mother's family died of breast cancer. Adibah's auntie (mother's sister) too had breast cancer and was under a remission for 10 good years before being diagnose with a stomach cancer. The memory of her Aunt was distinctive because when her aunt was admitted at the hospital, she died slowly and painfully. Adibah spend alot of time with her Aunt at the hospital and her Aunt always held Adibah's hand and at one point before her departure, the Aunt told Adibah that she has the smoothest hand and had Adibah to promised her, to always keep it smooth. Another aunt, the cousin to Adibah's mother was diagnosed with a breast cancer stage 4. 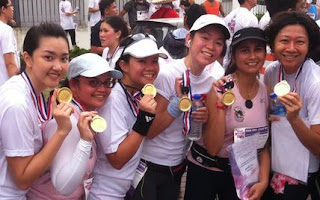 A week after the first appointment with the surgeon, Adibah went for a surgery under general anesthetic to remove the two lumps and as well as a chunk of tissues to test if the cancer had spread. The surgery had Adibah admitted for a week at the hospital and was discharged for barely a week before the results were received. The result from the surgery was first communicated to Adibah's sister. The sister explained that the smaller lump was a lymph nodes. Both the lumps were stage two cancer but the tissue was cleared of any cancer cell which means that Adibah will not lose her breast. 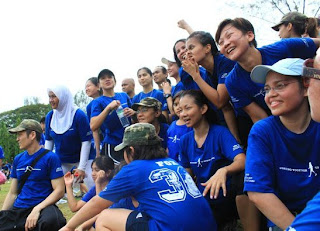 Adibah was mentally prepared for cancer. She knew that the symptoms were all positive for cancer and had mentally prepared herself. What is unbeknown is the extend of the cancer. I am not ready to die, Adibah broke down while her sister slowly explained her condition. Adibah is a single mother. She has a daughter Siti Hamizah Sheikh Mahfudz Fraij, aged 9. Adibah went through a bad marriage and was divorced in 2005. She raised her daughter alone since. The thought of Hamizah being without a mother was too much for Adibah to bear. Hamizah would sleep with her every night and she was the only inspiration that kept Adibah strong even at her worst marriage triumph. Adibah has been without any money and without the pillar of a husband but she had never lose herself but held, kept and raise Hamizah with nothing but all her love. Nothing could separate the love of a mother away from her child except death... and death seemed so close. Adibah had all her four sisters to promised her that they will care and love Hamizah like their own daughter. The failed marriage had in many ways, made Adibah a stronger women but no matter how strong she can be, she can only pray that Hamizah will be as strong as her. "Hamizah is only nine years old, she needs me, she needs her mother to guide her. I am not ready to die Armin", said Adibah in a slow stutter voice holding back her tears. "Although I've done my best but there are more that I can do as a mother. I want to fulfill my duty as a mother and to be a better muslim", was the only thought that kept playing in Adibah's mind. 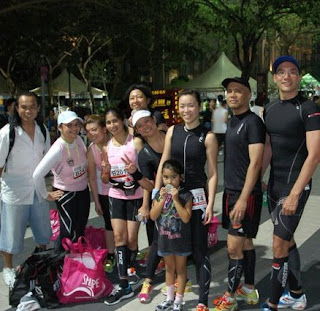 Adibah had always foresee herself to live until she exceeded the age of 80. She envisioned to see her daughter grow up to be independent, walk down the aisle of love and married with children. She only wants the best for her daughter, to know that her daughter is happily married and is in good hands before she is ready to depart. The diagnosis although in some way had affected Adibah emotionally but Adibah was determined to at least see through her daughter's graduation. 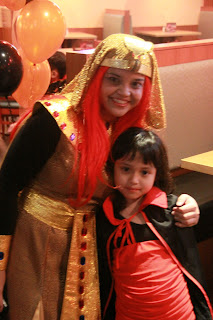 Adibah is a strong women. Those that knew her especially the Otais at COBC would vouch for that. When other recruit was complaining of their weight, Adibah was losing and achieving the weight that she targeted. Adibah lost 12kg while training at COBC. When some others were deliberating to either run and participate in any marathons, Adibah ran her maiden 21km half marathon at the Standard Chartered Kuala Lumpur International Marathon earlier this year. While others were happy being a Ranger at COBC, Adibah worked hard and progresses from a Ranger to a Seal. When others would lose themselves with such a prognosis, Adibah was thankful to god for the Stage 2 cancer. Many women only discovered their breast cancer when it was too late. Adibah said, God loves her.. that was why she felt the throbbing pain. The throbbing pain was akin of death knocking on her door.. a wake up call to remember that she is still alive and to be thankful with what she has.

Adibah is always ever so positive, strong and funny. Adibah is scheduled for a second surgery to clear all the lymph node of any cancer and to check if the cancer had spread but that does not deter her from wanting to live a normal life. Adibah will not allow the cancer to affect her, she will be strong for her daughter because she is the only shoulder that her daughter have. Beside that, I want to start back bootcamping!! At this moment, this is what I missed the most!, Adibah said in a more cheerful note. Adibah conveyed her deepest gratitude to her family at COBC. 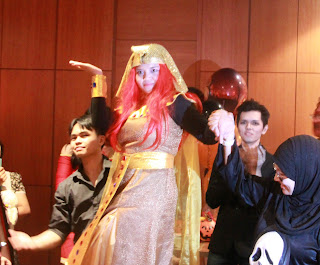 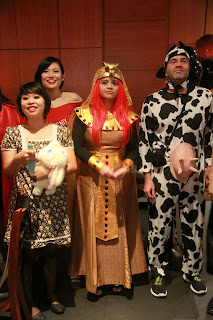 In Adibah's own words to everyone at COBC and every reader: "COBC is my extended family. My daughter and I enjoyed the monthly COBC outing (graduation night). Its like reliving our childhood with all kind of fancy dresses. Thank you for all the inspiration, laughter and pain. At COBC there are alot of positive, energetic and inspired people. It is important to be surrounded by these people. COBC has given me a wealth of friendship. Please live life to the fullest. Appreciate the time that you have even the time for yourself. Appreciate the people that care and especially appreciate yourself. There are things that we just cannot control. There is God who is the ultimate power. Be humble because in the end it does not matter what we have but it matters how we have impacted others.

Adibah's lung is cleared of cancer but at the point of writing,  Adibah is waiting for an ultrasound procedure to rule our cancer-spread to her stomach. Whatever the outcome of the ultrasound,  Adibah is scheduled for a 2nd surgery. After the surgery, Adibah will have to go through 25 sessions of radiotherapy and 6 sessions of chemotherapy.

On behalf of every reader and COBC'ians, we pray to ALLAH swt for your speedy recovery and may ALLAH swt bless you with the strongest of strength and willpower. Both Dr Malek Aziz and I completely understand what you are going through and if ever you need someone to talk, please do not hesitate to contact us. Adibah, I am proud to have you as a friend. We are proud to have you in our COBC fraternity. You are not only important in our circle but you are really a true friend. Thank you for always being there for us. Now.. get well quick, we need you to scream HOOYAH with us during training!! HOOYAH!! 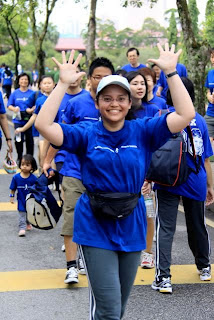 p/s- Prevention is always better than cure.. Take care of your health before its too late.